This year, the idea of managed portfolios and index fund portfolios has been on the rise, you can bet on many hitting the market in 2017. It’s a popular idea borrowed from Wall Street. For stocks 99% of index funds, namely a fund that buys the entire market passively, outperform actively managed funds.

I’ve been running simulations in the altcoin markets to see if this is true. If so it would be prudent to diversify across many altcoins as a higher performance investment over Bitcoin.

The results are surprising.

This simulation spans 16th October 2013 through to today – exactly 3 years. Earlier than this, and you’ll find the altcoin market was very undeveloped. My 3 year span happens to nicely capture the last bubble of 2013, the long bear market of 2014/15 and its subsequent recovery until today. This is great as it allows us to observe how indexes and bitcoin perform relative to each over in each scenario.

For all of my indexed portfolio simulations below, I rebalance them every 30 days to account for new comers into the list and old dropouts leaving.

Bitcoin vs The top 10 ranked altcoins proportioned by marketcap

Bitcoin outperformed the altcoin portfolio by 3.8x. Surprisingly during the 2013 bubble, alts performed even higher, but lost more ground in the bear market thereafter.

For those interested here is the coins held each 30-day cycle denoting the top 10 altcoins over the 3 years. 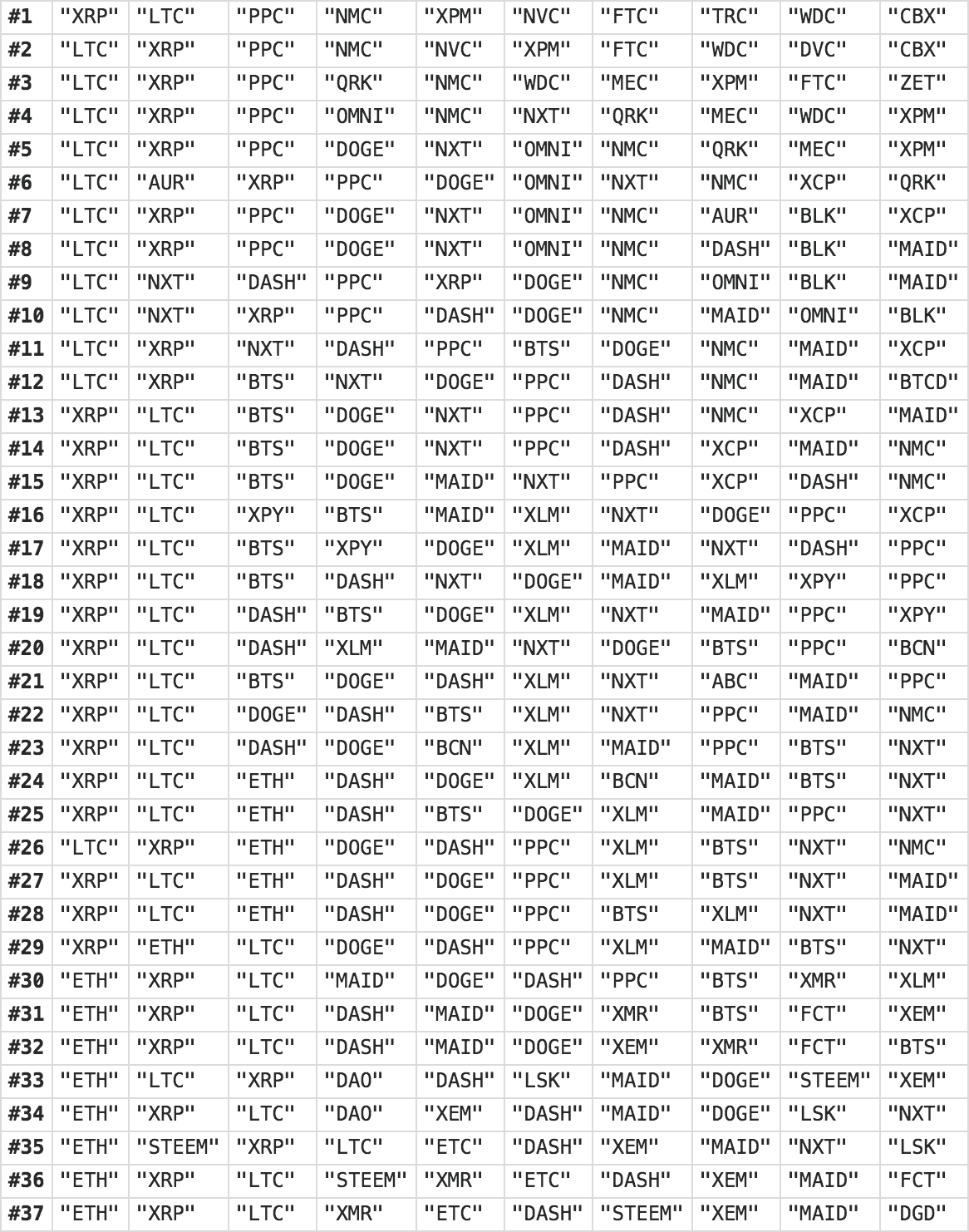 Bitcoin vs The top 20 ranked altcoins by proportioned marketcap

For those who want to see more coins in the portfolio, here’s the same simulation run across the top 20 altcoins. The results are almost identical. (At this point I’ve had people say to me the numbers are wrong – trust me these numbers are correct).

Bitcoin vs the 11th-20th ranked altcoins by proportioned marketcap

To shake things up, here’s a portfolio with ten “small cap” alts ranked 11th through to 20th making up the index. The idea behind this one is to capture the coins that have more potential for growth and exiting once they graduate to the big leagues (or fade into oblivion).

These results were one of the more promising index allocations, the portfolio dropped less during the bear market and had impressive gains during bull markets, however bitcoin still won out with a 4.6x return vs 3.6x for the index which also exhibited more volatility.

Bitcoin vs The top 20 ranked altcoins by CAPPED marketcap proportion

Off the back of Iconomi’s ICO raising $10.6m USD, I wanted to simulate an index similar to their CTF offering. Iconomi use a 25% cap and a further mechanism of categories to distribute the allocations.

Here’s an index with a maximum allocation of 25% for any altcoin in the basket. It will differ slightly from Iconomi’s fund, but likely their results will be a halfway point between these results and the last index simulation which uses equal allocation.

I may run their exact allocation through a simulation if I get enough requests (try me on Twitter).

Part of my beef with their investor whitepaper is they picked a bull market (since Jan 2016) to demonstrate their glam results, but here’s a simulation run through a bear market. It seriously underperforms the vanilla standard indexes above, and significantly underperforms Bitcoin. Nevertheless clients will unlikely notice this until our next bear market which is a while away.

Bitcoin vs The top 20 ranked altcoins allocated by EQUAL proportion

Going with the theme of more distributed allocation, this index proportions holdings equally at the start of each 30 day cycle. This one was a disaster with an abysmal 0.64x return (a significant loss).

Bitcoin is really hard to beat with index funds, maybe unbeatable with the present state of altcoins we have. Not only do they underperform Bitcoin by a significant amount, but as a combined basket their day to day volatility is higher.

I ask myself why we don’t parallel the stock market world where indexes are very successful and my conclusion is we are in a world of unvetted shitcoins. When a company goes IPO, it needs to mature for many years and must qualify under stringent SEC criteria. Not so in altcoin land, they are like early stage startups who IPO immediately, but any angel investor will tell you they see a 99% failure rate of early stage startups.

There will be a bunch of altcoin funds hitting the crypto investment world in this coming year. Having seen the data, I would take the index based approaches to fund investment with a decent grain of salt.

Last week I created the Commerce Index as a means to measure a coin’s suitability for general commerce. In a nutshell it tracks the property of liquidity and low volatility. Both consumers and merchants want a currency that is stable and has high

I’ve decided to come up with a new index to measure how suitable a coin is for generable purpose commerce. For a consumer to hold a coin in their wallet, they want good liquidity and low volatility. Similarly the merchant on the other