Bitcoin was created in 2009 by a mysterious character who claimed it to be a payments network. But unlike most other payment networks like PayPal and Visa, it screwed with our minds by having its own token. A token that had a price that floated against other currencies. In basic terms, this means if you fund a bitcoin wallet to buy something, it may be worth less (or more) by the time you come around to spending it.

This is the story of bitcoin volatility, we’ll be studying its personality over its short and notorious history. It was partly inspired by Vinny Lingham who calculated Bitcoin will achieve the necessary price stability to be a store of value at $3000 per coin (~$50b market cap), and estimated that to be two year away. We shall see if the data backs this up.

@VinnyLingham
interview: #bitcoin mainstream in 3-10yrs. Useful as a store of value when price hits $3k ~2yrs away https://t.co/0qmQTGU1Cb

We’ll start this journey with a bit of eye candy. Let me plot for you the volatility of 600 cryptocurrencies against their market caps and 24 hour traded volume (i.e. liquidity). Volatility is represented by the size of their circle. Okay circles, I want you to be small and towards the top, got it? (This equals low volatility and high liquidity). 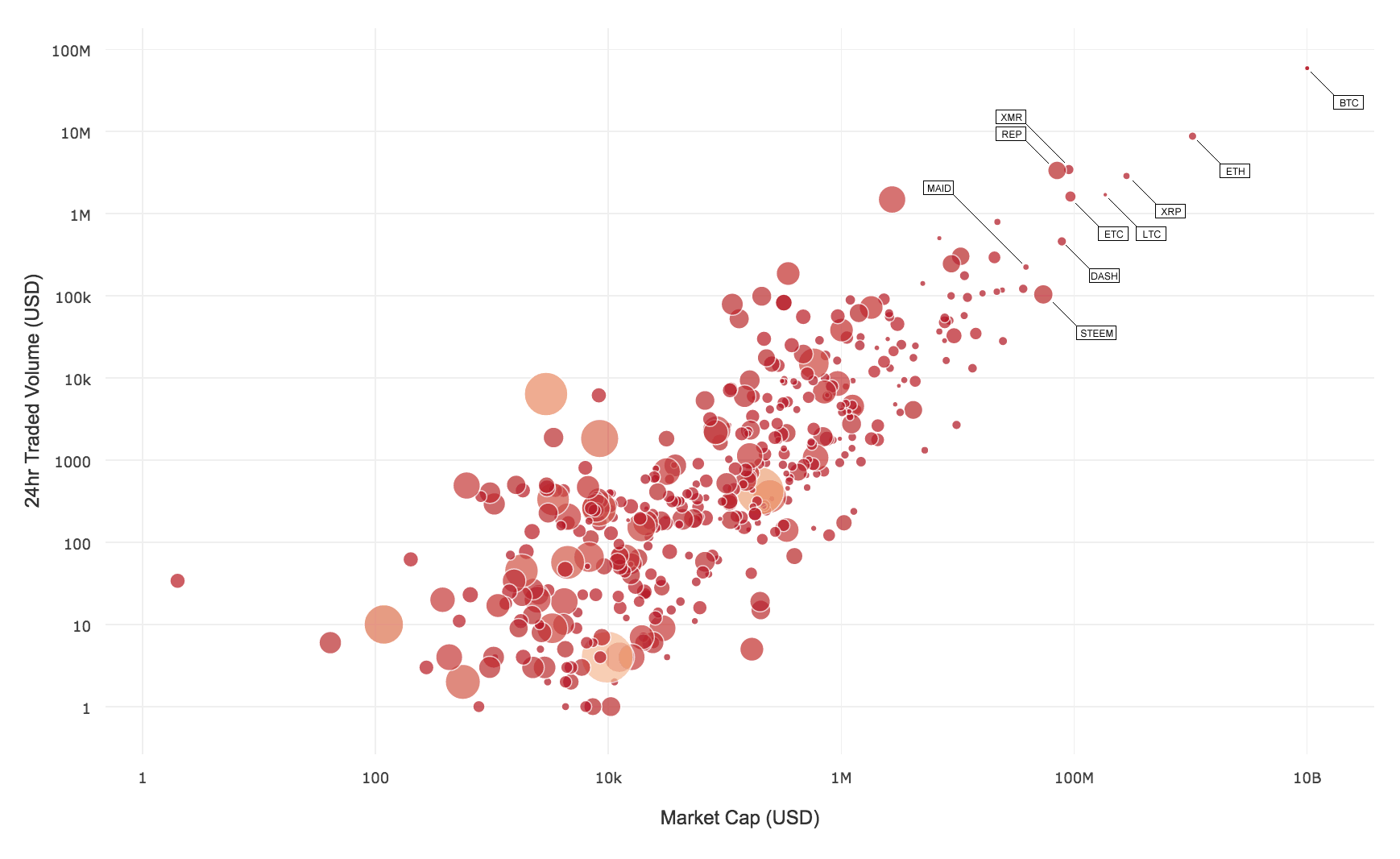 As it turns out it was a weak correlation between market cap and volatility. Apart from looking real nice, it showed just how far ahead bitcoin is over the other coins. Pundits should know I used log scales and exponentially scaled circles to reduce the exaggerated differences here.

Onwards to the real focus of this study… Dearest Bitcoin, how long will it take for you to be as stable as fiat currencies?

To answer this, I collated 5 years of bitcoin price data against USD (BTCUSD) and compared it to EURUSD and NZDUSD currency pairs to produce this very telling graph. 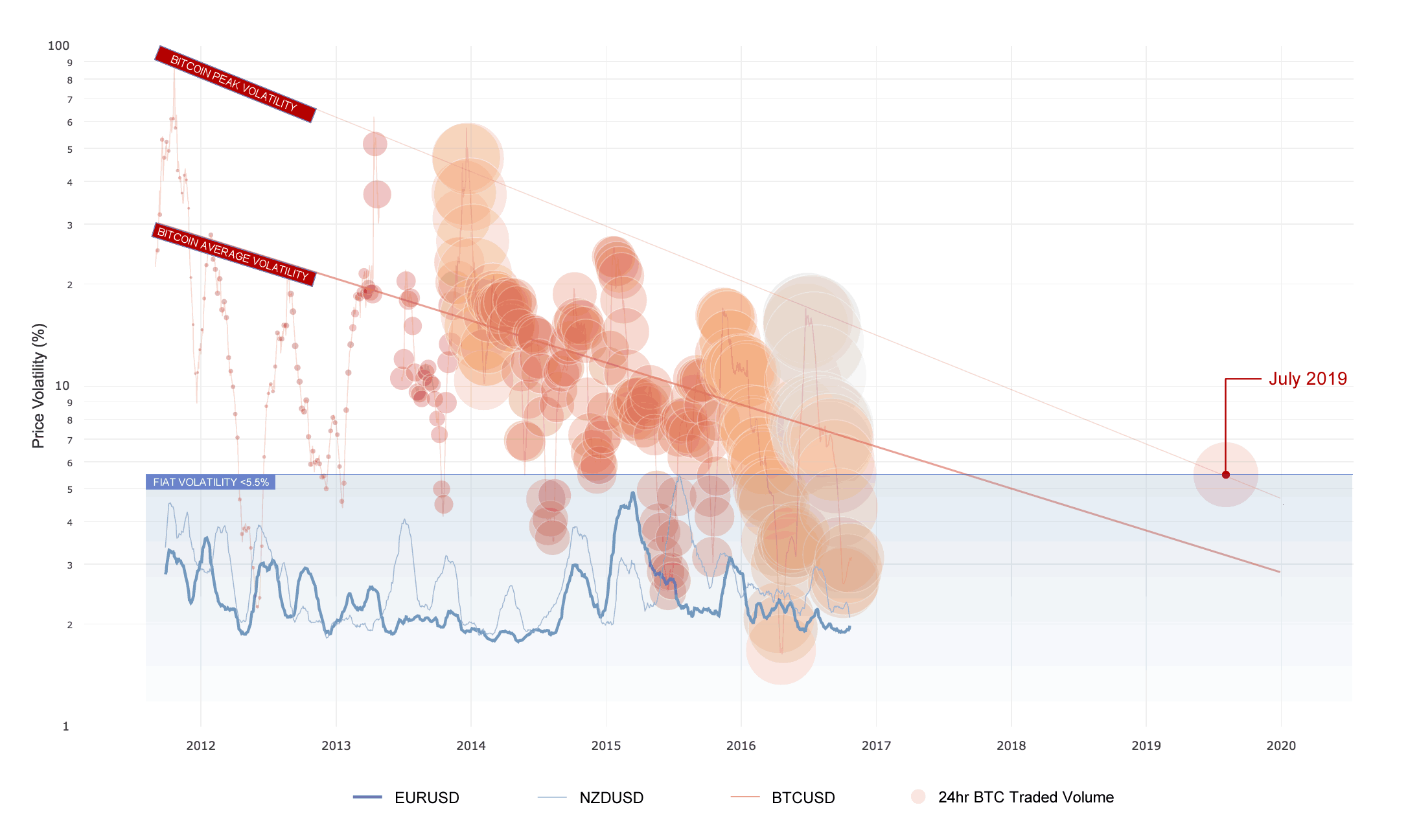 [[Live Chart]](http://charts.woobull.com/bitcoin-volatility/)
First some details about this graph:

What we are seeing is bitcoin’s peak volatility is reducing steadily and will enter the realms of fiat currency (below 5.5%) by around July 2019. I found this surprising.

For a currency with a tiny market cap of $10b, compared to say the Euro’s M1 money supply of $7.5t, bitcoin’s price stability is ridiculously good.

The economic properties needed for bitcoin to go mainstream are developing quickly. If we take fiat-level FOREX volatility as a level in which the public find acceptable (this is not necessarily true), we are less than 2 years out for the start of prime time “bitcoin as payments” heaven. For now these are my investor related conclusions:

FOOTNOTE: As part of this study, I found the bitcoin volatility information most people refer to, namely [btcvol.info](https://btcvol.info/) looks wrong. My volatility calculations put volatility around ~5x higher than this site. To double check my calculations my curves have been confirmed by comparing to the more official tradingview.com charts for FOREX.
Introduction In any market, price is driven by demand and supply. This is a fundamental. The most obvious way of seeing this is in the bid and asks between buyers and sellers. A more nuanced way would be to wave a magic wand and gauge the intent of investors before
This is a thread on altcoins, first published on Twitter [https://twitter.com/woonomic/status/1192316072533229568?s=20]. Altcoins are nuanced. We have: * Protocol coins * Utility tokens * Security tokens * Non-fungible tokens But to an investor, there's only 2 types. Oscillators and Degenerators. You can spot them on this chart of
Introducing the Bitcoin Difficulty Ribbon. When the ribbon compresses, or flips negative, these are the best times to buy Bitcoin. The ribbon consists of simple moving averages on mining difficulty so we can easily see the rate of change in difficulty. How it the Difficulty Ribbon works This visualisation of