This is Bitcoin’s transaction turnover as a function of their market cap: 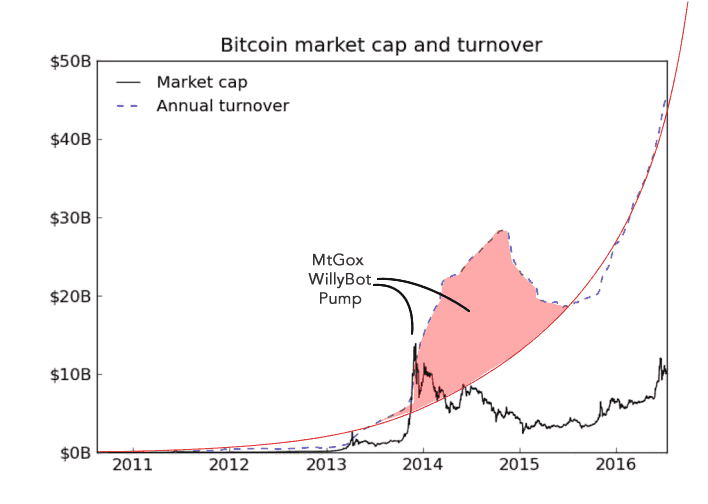 For Bitcoin, the ratio of turnover to marketcap is 4.5x ($45b turnover vs $10b marketcap)

Bitcoin is valued higher than PayPal for a given turnover, this seems justified as Bitcoin is growing at 100% vs PayPal’s 27%.

To justify Dash’s market cap of $75m, based solely as a payments network, and if we assume Dash is growing like Bitcoin’s rate… Dash needs to be over $340m per annum. It’s hard to find figures on this as the Dash blockchain explorers aren’t publishing graphs of historical growth and transaction volume. But if we assume similar growth to Bitcoin and doing my own really rough estimations on transaction volume (see footer notes**), it’s around $54m per annum. Or in other words Dash is 6.3x overvalued as a payments network.

This leads to the conclusion that Dash’s market cap is a valuation based on its blockchain governance model and in anticipation of huge growth incoming when Evolution is released next year.

A final caveat for those who think Dash is gonna go to the moon, these things take time. They are multi-year/decade trends. Altcoin pump and dumps can be misleading. People thought Bitcoin would be valued at $50,000 by now – that may happen but to support this valuation as a payments network, it would need to do $4.5 trillion dollars of volume. By comparison credit cards do approximately $6 trillion.

In real terms, I mean by historical adoption curves of new technology, this curve will be longer than a decade.

** Right now a snapshot of Bitinfocharts shows 95,754 Dash transacted in the last 24 hours with todays price of $11.36. A really rough a dirty estimate of transaction outputs is $397m. But remember when a payment is made, Dash is sent, and some Dash is returned as change. We are only interested in the outputs that are truly transacted and not returned as change. The best figure I have on the real transaction volume excluding the change component is to look at Blockchain.info’s estimation for Bitcoin, they have a few million wallets, so they have better data than most on the behaviour of wallet transactions. The last 6 months of data shows on average 13.6% of the blockchain input/output is transacted.